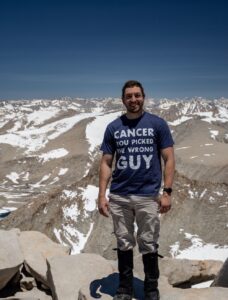 Alec Sills-Trausch’s love for the outdoors stems from his family. At a very young age, he was introduced into the world of adventure. From being dragged kicking and screaming as a kid, to now waking up before sunrise or staying up through the night to snag the perfect shot. He combines adventure travel and photography to inspire others to enjoy mother nature as much as he does. In November of 2018, he was diagnosed with Gray Zone Lymphoma but it did not stop him from enjoying the adventures of the outdoors. Through treatment, he was able to appreciate and enjoy daily activities. In April of 2019, Alec was declared Cancer Free. On July 4th, 2019, he summited Mt. Whitney in a day, he also the Rim to Rim Canyon trek also in one day, explored the backcountry of Wyoming and the adventures continue. At 28, he’s only been taking photos for two years but enjoys the perspective it has brought to his life and the ability to document the wonders of the world.

Introduction to Alec – He reads an excerpt from his blog entry in February 2020 post cancer treatment.

2:47 Alec tells us about his love for traveling in the United States

2:51 Alec shares with us a little backstory about the excerpt he read out loud in the beginning and his cancer journey, and how shortly after remission he went on to climb Mt. Whitney, the highest mountain in the lower 48 and the rim to rim of the Grand Canyon and one day

9:27 Alec shares his passion for travel, his love for small towns, and Boise, Idaho. He even thought about moving to Boise because of the proximity to Mt. Rainier and other beautiful locations.

11:50 Idaho and the pristine landscape and milky way filled sky

12:20 Alec loves to go on road trips and he explains his perspective on the importance of being on the road.

13:35 Alec prefers to sleep in a tent and he shares the ease of what it can be once you learn the routine.

16:15 Alec shares a night at Island lake at 12,400 feet where he heard a howl at an elevation where there should be no life

17:40 Alec shares his love for backpacking and why he loves this type of travel. HE shares one of his favorite backpacking trips in Wyoming.

18:48 The Wind River Range and the Titcomb basin is one of Alec’s favorite backcountry trails. He shares the some of the difficulties of this “worth it” backpacking trek (i.e. mosquitos)

21:00 Alec shares his hike to the top of Whitney less than 4 months out of the Chemotherapy treatment. Alec summited Mt. Whitney through the infamous chute that people take when they cannot go up the traditional route on the 99 switchbacks due to snowfall.

23:25 Drea shares her difficulty with elevation and how she almost every time gets elevation sickness

24:45 Mt. Whitney after Trail crest – The longest last push up to the summit ever. Both Drea and Alec discuss that last push being the hardest part. Alec tells us how fast he got the permit and the last minute decision to climb the highest mountain in the lower 48 states.

27:10 Alec shares us why he began this type of lifestyle

29:53 Alec tell us the story of how he started to do photography. He bought his camera from Craigslist and it worked out great!

31:00 Alec also has a travel blog and journal in which he shares his adventures as well as his cancer journey. In the very beginning of his online blog, his purpose was to keep his family informed about his life but then it transformed into trying to help others experience the adventures he was having. Alec wanted to create a place where he can share advice to others. The blog started with wanting to share his adventures with his parents and now he gets 2-3000 new visitors to his site per month.

32:33 Alec shares his favorite places have been BANFF, CANADA and WYOMING.

33:10 He shares a few tips and tricks for those – Places to stay in Banff, Canada and The Grand Tetons

In Banff, he highly recommends the Banff International Hostel because of the bar in the basement. He also loved “The hostel” in the Grand Teton Village.

35:45 Alec shares with us some advice for anyone going through a similar journey.

37:22 Alec runs into a very interesting man in the Grand Canyon that ended up being a pretty remarkable person.

39:00 Alec shares his favorite fulfilling moment doing the rim and rim 2 months after all his cancer therapy

40:41 Alec shares his life advice to himself.