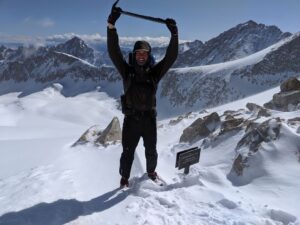 0:00 Tim Stroek’s reads from one of his instagram entries when he climbed the Sierras during his Pacific Crest Trail thru hike in 2019.

1:07 Who is Tim Stroeks? Drea shares his extensive adventure bio with us

2:31 25 years old and 32 countries. Tim shares his love for travel and where he found this passion.

5:17 Tim shares how much he loves to rough it and how he likes to

8:08 Tim gets his love for travel from his parents and family. He started traveling adventurously very young and that love for the outdoors has stayed with him as an adult

8:17 Tim shares with us his favorite trails and why he chose these trails.

8:41 The King’s Trail in Sweden – The Arctic Circle and camping under the midnight sun – Tim shares with us some an experience with the locals that give you rides across the many lakes on this trail.

10:35 Tim shares with us what a TRAIL ANGEL is on the PCT – The volunteers who provide their time, food, rides and supplies for hikers along the PCT

14:01 What is the PCT – Tim explains what the Pacific Crest Trail – The whole hike is 2650 but changes from year to year. Tim shares the changes that happens in PCT that may increase the mileage

16:14 Tim shares his Mt Whitney detour off of his PCT hike, the craziness of mountain weather, and what it’s like to stand on top of it.

20:41 Drea asks Tim the average mileage of a PCT hiker, the importance of keeping up your mileage to meet your window of hiking, and he shares his highest mileage count – 40!

23:41 Tim discusses the excerpt at the very beginning

28:35 Tim has always challenged himself and the PCT pushed his boundaries. This is what drove him to attempt this trail.

30:51 Drea asks Tim how he prepared for the long journey on the PCT – Permits, Getting a Visa as a foreigner, organizing the gear that works for you, the importance of planning and also not planning, delivering packages to resupply.

38:05 Talking to other hikers to figure out a plan, where to send packages, and planning on the actual trail.

40:42 Tim shares with us some of his fears in hiking the PCT. Tim was really afraid of failing and also getting injured early in the hike.

42:19 Tim tell us why he was unable to complete the PCT. He was only 150 miles short from the Canadian border.

44:37 The dangers on the PCT include some animals – Here is Tim and his rattlesnake story, a Black Bear and her cubs and a mountain lion!

46:50 Tim shares the challenges of crossing the Sierras during the high snow season – Having to break trail, The Snow Bridges, then the Higher River Crossings, etc.

48:20 Meeting people in the Sierras and starting a “Tram”ily

50:00 How you get your Trail Name? Tim was called Davey Jones and he shares the story behind it.

53:08 Tim shares his most fulfilling moment – Conquering the Sierras during a high snow year

54:43 Tim shares his Tips and Tricks for anyone who wants to attempt to do the PCT – Do not over prepare, do not get overwhelmed about how far you have to – take it day by day.

57:28 Tim’s BEST DAY was when his friend visited him from the Netherlands

61:01 Tim’s most meaningful person he met on the trail

63:00 Tim’s Advice to himself – “Stand still and look at what you’ve done already”

64:00 Where is Tim going to next – The List of the countries he plans on doing

65:00 Follow him on instagram on @timstroeks and he has a blog that he has started with his daily journal on his PCT hike on www.Strookyblogs.com