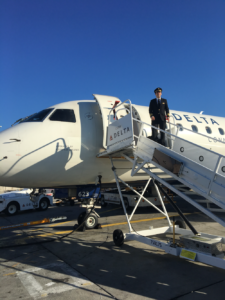 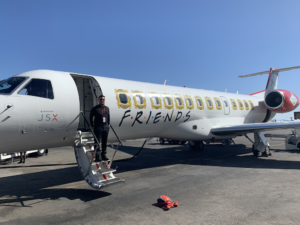 In this episode, pilot Ruben Garay shares his journey from Hollywood producer to pilot
for a major commercial airline affected by the pandemic. He was one of the many people in the airline industry who was furloughed. He reveals the journey to reaching his childhood dreams of flying and readjusting his life. He shares some valuable advice to aspiring pilots who now see the current state of the industry —- go for it. Things will change.

Update from when we recorded this: Ruben is flying again. For
more updates on his life, check him out on @californiapilot

I’ve known Ruben for many, many years – over a decade and yet in that time, I’ve never had the chance to really sit down with my friend to hear his journey.  It’s funny… you meet someone, you become friends, you have brief glimpses into their thought process and maybe have a quick chat about their lives, but it’s so rare to be able to have the opportunity to ask questions the way I get to when I do a podcast.  It’s intimate.  It’s real.  It’s raw and you as the interviewer, get the chance to really find out who this person is because you just listen.  And that is one of the most valuable lessons I have learned during this journey of podcasting… the value of listening.  Ruben shared with me the ups and downs of his love for aviation.  There were times in our friendship where I would hear him gush over the type of plane flying over us but it wasn’t until now and during this podcast where I truly learned his love for flying in the skies above me.  He is one of the most hard working people I have ever met.  In any industry he decided to take on, he succeeds.  I don’t know why that is, but some people are made up that way.  We have that in common.  The undeniable desire to succeed in whatever we put our mind into.  We don’t stop.  We keep going and we only look back to share the gratitude we’ve had for the journey. I know his world has been turned upside down during this pandemic.  We all have.  It’s been such a crazy journey and at the end of it all, he has come out from the other side.  He is again flying the skies since recording this episode.

And yet again, he proves how amazing he really is.

Thank you for sharing your journey with me, Ruben!

00:00 Ruben reads an excerpt from his travels