EP 20: WALKING ACROSS THE USA – WEST TO EAST & SOUTH TO NORTH – WITH MIKE CROWLEY 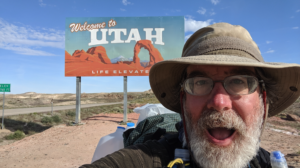 In this episode, we hear about the long journey walking across the USA with Mike Crowley. Mike shares the inspiration that brought him to trek across the USA 2x and the lessons he learned during this mentally challenging but rewarding voyage.

If you’ve ever dreamed of selling all your belongings and living a life on the road indefinitely, then this is the podcast episode for you.

I was first referred to Mike Crowley from one of my podcast guests, Alec Sills Trauch.  During Alec’s time in the Grand Canyon he encountered this incredible human being, Mike Crowley.  I didn’t know what to expect really when I talked to him except that I knew it was going to be something special.  This man had hiked the entire USA from West to East and again decided to it a year later from South to North through multiple seasons.  Thru hiking is very special and not for the faint of heart.  There is nothing about it that is easy, not physically, mentally and emotionally.  First thing I noticed from Mike was his calming presence.  I at times have frantic energy especially when I’m stressed out with the many, many things that I do.  Mike was the complete opposite and right away, his energy calmed mine.  He was serene.  He was complete.  He was present.  I loved talking to him.  It reminds me of the simplest of things.. the things that really matter.  Hearing his journey and how he got there, and all the people he’s met along the way, and all the roads he’s taken that were less trodden, reminded me of the important things in life.  There were times during this interview that made me want to cry.  Plenty of times, just the tone of his voice sounded so soothing and like a poem he would share his life.  Though at this time, I don’t think I’ll do a cross country American walk but I do know that I’ll probably attempt a thru hike of some sort, and I do know that perhaps I’ll take some of his advice to remember the importance of silence and experience the universe and the appreciation to turn off time.