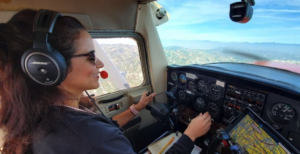 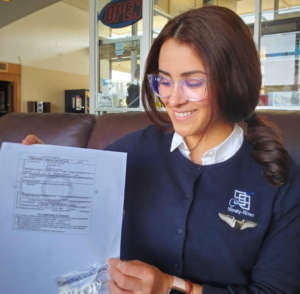 Soyla Flor was born in San Diego, California and raised in Los Angeles.  She has traveled to 51 countries, lived in Paris, France to study Art History, and in Rishikesh, India to study Hatha Yoga. In 2015, she decided that she was ready to embark on a new journey, when she was hired as a flight attendant for Delta Air Lines and discovered aviation.Her love for travel and adventure has married perfectly with aviation. She took her first ‘discovery flight’ in November of 2018, and in February 2020 became a private pilot.She is currently working on my instrument rating and commercial pilot license, and her goal is to become a Certified Flight Instructor and eventually an airplane pilot. When she travels she enjoy spending her time mingling with the locals and sitting at coffee shops while people-watching. She also love cats, mangos, yoga, and deep meaningful conversations. Want to connect? Follow me on Facebook or Instagram @soylaflor. God bless!

Before speaking to Soyla, I didn’t really have any idea of how truly difficult it is to be a female pilot.  I mean, I saw that stats and did some research but hearing how isolating it can be as a woman was certainly eye-opening.  And who knew, there would be a group of avaition women called “The 99’s” that would come together to support each other.  The pursuit of aviation and becoming a pilot is so hard as it is, but being a woman pilot is even harder especially when you don’t have aviation running in the family.  BUT Soyla shares with us her journey to keep going and fighting for that dream.  It’s amazing to see her career grow and blossom into this “unicorn” woman that she is.  Soyla shares some handy tips for chasing those blue skies!

My take away as a fellow unicorn in a different male dominated industry – WE GOT THIS.  And if you’re a woman out there trying to fight for that dream that is usually a dream for men, know that you can do it.  Thanks for the inspiration, Soyla Flor!

Intro:Soyla shares her experience in Cuba when she decided to give back to the local community7:10 Soyla tell us about her aviation journey and getting hired for Delta12:28 The challenges of being a pilot and finding “The 99’s”16:37 Soyla shares her love for india during her spiritual awakening, Hatha yoga training course she attended.  19:09 Tips and Tricks for traveling to India23:05 An adventurous trip to Honduras and a near death experience on a boat29:00 Soyla talks about her next adventure, Dubai31:22 Soyla’s favorite items to travel with32:30 Soyla shares the advice she would give her younger self33:32 Soyla can be found on TIKTOK
AircraftairplaneAviationfemale pilotFlyinghaha yogaHondurasindiapilotRishikeshthe 99swoman pilotYoga