You don’t have to be a rocket scientist to travel the world, but sometimes it helps. Having spent 8 years building a career testing rockets with SpaceX, Amado DeHoyos decided to leave it early in 2015 and spent the last 5 years circling the globe on a seemingly never-ending quest – the desire to see the world. A friend made the fateful decision early in that trip to gift Amado a book called “100 Wonders” and he would sweep the globe, attempting to visit as many of those as he possible could (currently at 97, those last 3 are going to be tricky…). The checklist of 100 Wonders would expand to the checklist of UNESCO world heritage sites and would then expand to just being and living in the moment among the cultures of the world.

My take away from Amado’s interview – I want to go to Antarctica.  I mean, I’ve always wanted to go but now hearing his gorgeous journey to the arctic, my heart is calling out to the tundra and penguins of the South! I’ve never met someone who had accomplished so much by seeing the world.  His journey inspired me and I learned so much in our short talk.  He has visited 430 UNESCO Sites! 97 of the 100 wonders of the world?!?!?!   That in itself is pretty darn impressive.  I have books like the “100 wonders of the world” book that he based his explorations off of, but I’ve never actually said… Hmmm, I’m going to tick every single one of these off, but now, maybe I should?!

Cheers to crossing off bucket lists!  Kudos to you Amado! 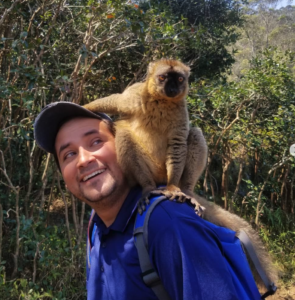 1:04 Amado discusses the book that changed the course of his life.

Dehoyos has traveled to a 117 countries (including Antarctica), alongside 430 UNESCO sites.

5:33 A former engineer for SpaceX, Amado discusses the transition to following his dreams to explore the world. He discusses his travels to Rome and Machu Picchu.

12:40 Amado shares his secrets to get to Antarctica.

Wildlife in Antartica and the Polar Bear Plunge

Discusses his love for New Zealand and some tips and tricks

21.15 Find out how to cover the trail while en-route to Santiago de Compostela in Spain.

Interesting stuff to carry during travel.

The desire to travel to Iran and visit the man-made and god-made beauty out there.